Towards the end of the 1920s Garretts produced both single and double-decker electric trolley buses.

Built for agility, and unlike the older steam vehicles constructed as far as possible of lightweight material, very few have survived and the Leiston museum has only a bare chassis to display (behind the Long Shop building near the end of Sirapite’s line) – though there is a fine model of a double-decker in the Exhibition Hall.  However an old movie reel Garretts commissioned to market the vehicles to potential buyers has recently been digitized. Shot before sound became common, and long before technicolor, some was filmed around Doncaster and some (where the buses start driving on the right of the road) possibly in Denmark. (A 1926 example originally sold to Copenhagen is now housed at the excellent East Anglia Transport Museum in Carlton Colville – but check with them first to find if it’s on display).

Garrets O-type electric buses were still running passenger services in Denmark until 1964, and in Britain the last trolley disappeared from the streets as late as 1972 – being replaced entirely by noisy, polluting diesels. One reason was the trolley’s need to keep a connection to the overhead wire restricted its top speed to around 20 mph – you may have noticed in the film clip how furiously a Yorkshire cyclist had to pedal to try to overtake the bus. 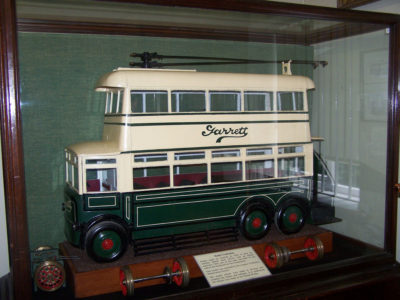 Dates for your Diary!